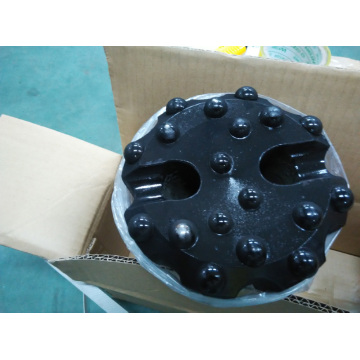 Model No.:  all DTH drill bit

Model NO.: all DTH drill bit

In highly abrasive, extremely hard harsh geological environment, the life of ordinary carbide drill only a few meters to more than one hundred meters, PDC bits' life can reach 5-30 times than the normal carbide drills'.

Reduce time of rig down, replace drill bit, grinding and so on.

Consistent drilling speed, almost no reduction of the hole diameter, reducing the rate of holding and sticking drill, reduction of fuel consumption.

5. Reducing consumption of the hammer.

Drilling parameters consistently, almost no problems of reducing bit diameter, decrease the wear and consumption of the hammer.

Comprehensive benefit-cost ratio is very high. It is the future trend of development.

7. Increasing the life of the equipment.

Contact us if you need more details on PDC DTH Drill Bit. We are ready to answer your questions on packaging, logistics, certification or any other aspects about DTH Drill Bit、Drilling Tool. If these products fail to match your need, please contact us and we would like to provide relevant information.

Email to this supplier